While the others were out and about, Katie and I spent the afternoon being idyllically and productively idle. We donned our cozy sweatshirts and fall scarves and headed to City Island to embrace the beck and call of fall. Ducks were seen. Gazebos were visited. Selfies were taken. An ambling rooster was stared down. Along the People’s Bridge we saw from the distance a gentleman chalking, etching his love into the sidewalk and nervously preparing for his evening proposal (good luck, Thomas and Alicia).

Most importantly, we fulfilled Katie’s lifelong bucket list item to ride in a horse carriage. Ally patiently waited as the horse was being hitched, while Katie’s excitement grew. When the horse was brought around to the carriage, we learned that the horses name was Casper and he was an 18.2 hand Clydesdale. The first thing Katie did was ask the coachman if she could pet the horse and instantly moved to Casper to inspect him and check to see if he was, indeed, taller than she. After taking some candid pictures, Ally and Katie loaded into the carriage and took the long and anticipated ride around City Island with Casper leading the way. Casper led a very easy ride around the island; the ride was very peaceful. We heard the wind blowing the leaves and Casper’s hooves walking along the pavement, it was definitely a nice and relaxing way to spend a Saturday afternoon in October! Katie walked away crossing one of the top items off her bucket list and feeling a sense of tranquility after petting Casper, smelling the barn, and riding the carriage.

With the wind swirling eddies around us, blowing away the weight of the week’s frustrations, it was impossible to feel anything but breezy and beautiful (covergirl). 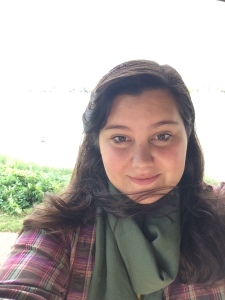